Get fresh music recommendations delivered to your inbox every Friday.
We've updated our Terms of Use. You can review the changes here.

by The Mouldy Lovers 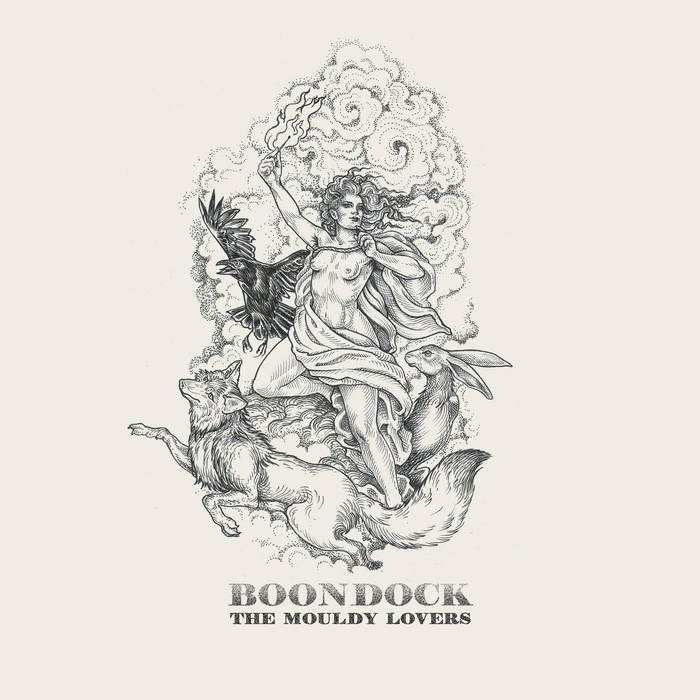 Boondock ''The boondocks is an American expression that stems from the Tagalog word bundók ("mountain"). It originally referred to a remote rural area, but now it is often applied to an out-of-the-way city or town considered backward and unsophisticated.

The song is concerned with how environment has an effect on people, and how people in turn have an effect on their environment. The song was instigated by the rising tide of gentrification around the bands home suburb of West End (Kurilpa) in Brisbane, and leaps into the exploration of colonisation, domination and resistance. Trickster mythology gets woven into this metropolitan struggle, the tale of an anti-shero keeping the faith in freedom, expression, love and creativity, in the face of any adversity.

Australia can be your boondock. Brisbane can be your boondock. West End can be your Boondock. Your culture can be a boondock. Your mind can be a boondock. The boondock knows no good nor bad. It exists, latent, fecund. The fire in the fringes. Marginal, wild, fragile, independent, ephemeral, welcoming, burning bright in the belief of one’s power. Once again it’s the weeds flowering in the bitumen, a celebration of the people and places, resilient in sacred waste lands, limbos, constant regenerations and hope. It is the belief in a future, no matter how far we are pushed off course. We can be lost, but all is not lost.

Traffic jam boom in a boon dock talk is cheap nothing's free all drowned out cry
try to make a sound top of the cranes to the underground who put the fire out?
All across the town getting crushed in the rush from the top down staring at the ceiling now you're sinking
almost believing in the pittance that you're given midnights promise of an intimate extinction
Today I’m a bird on migration, with my raised fist in place of my apathy
I'm exploding through the clouds, parading in the rain on the lonely crowds
a ghost of a chance is good enough for now, if I can sell my shadow to the dark
the longing, the sirens songing in my breath a pulse poised, baited and possessed
You're the kinda thief we need, a hurricane, dropping seeds in the street
latent, waiting on a time to rise in a season, a song, a flood or fire
Still the traffic jam booms in a boon town talk is cheap nothing's free all drowned out cry!
a root will still the concrete defeat like a heart on ice just slumbers heat

In the boon dock love spits bitter on the tongue
bitter for the better when we're coming undone
Unravel on a radical! Radio! Dial! Here the DJ play ESPERANZA STYLE!
All this has gotta taste like a smell I know
I hear the laughter rising over the slamming of the door
Bang out a new boogie for our anthropocene-a...
The racket south of the river, is it making us believers!?

Oh! How far does it go?
How does the cage form the animal?

trickster trick me show me the way
I was losing faith in freedom oh I was slipping away
beyond the border lines, the ghost bikes, the home sick sonnets and the street light lies
my dreams become real in the camp fire light
the distillation of our tears now they shine so bright
I see Caroline clothed in Prometheus pose and the nights saxophone it blows oh it blows Oh!

How far does it go?
How does the cage form the animal?

We're trained for sweetness
and you're the thief we need
behind the slamming of the door
you gave us something to believe!

The Mouldy Lovers are a 7-piece concoction of ska, punk and dub known for their unique sound and raucous live performances.